Somehow or other, over the past couple of years, I ended up doing a bunch of riding with members of the cult know as Cyclocross Racers. I say cult because, aside from their devotion to riding bikes that are not quite road bikes and not quite mountain bikes, their secondary goal seemed to be to get everyone who wasn’t currently a Cyclocross Racer to become one. Not having a suitable CX bike, my out had always been “It sounds great but if I try to sneak another bike into the stable I’ll be in trouble…”. If I had $1 for each time a CX’er had said, “Look…it’s SO fun…you HAVE to do it! You’ll LOVE it!”, I’d be well on my way to a sweet carbon CX rig. Eventually, last Fall, the local CX Cult Leader Mike Rowell became so annoyed with my “Don’t have a bike” tactic that he climbed up into his attic, rooted around in some boxes in his basement, and handed me a CX bike with instructions of “See you Wednesday at 5:30 at The BikeWay Source.” 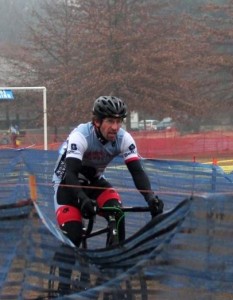 That Wednesday evening I found myself sprinting pell-mell around a field in pursuit of a bunch of seasoned Cxers, mostly watching their taillights rapidly disappear in front of me. We then switched to some skills practice where we did laps on a course that involved weaving through a swingset, riding across a beach, hopping off the bike and jumping over some PVC tubes then hopping back on, and myriad other silly tasks apparently designed to cause me to contact the ground in an embarassing fashion.

As we began the laps, I was doing a fairly decent job of applying the lessons I’d just learned during the field laps, and was firmly in the middle of our group as we approached the barriers where we were to dismount, jump over while carrying the bike, and then remount. Like a pro, I unclipped one shoe, swung that leg off the saddle, and hit the ground in stride. With ease, I cleared the 10” high PVC pipe, put the bike down and attempted to mimic the graceful mount of those in front of me. The smoothness with which I’d executed the maneuver to that point gave no hint to those behind me of what was to happen next. Instead of nimbly settling back onto my seat and sprinting away, I managed to get one knee mostly onto the saddle, but the other leg stayed firmly on the ground. With the bike’s forward momentum, I quickly had to start hopping along on the one leg as the bike started a decreasing radius turn, ending with some combination of me on top of the bike and the bike on top of me, and a lot of bewildered cursing from the people behind me.

The advantage to riding with experienced people is that they have really good bike handling skills, which thankfully meant that nobody ran me over as I skidded to a halt and lay there on the ground tangled up in my bike. A timeout was officially called and with the input from those behind me, my crash was carefully reconstructed, analyzed, and deemed one of the worst attempts at a mount anyone had ever seen…quite an accomplishment given the experience level of those present.

Despite the collective best efforts of the group, I couldn’t seem to convince myself to commit to the mount, mostly due to my internal concerns about the sensitive nature of the saddle/rider interface region. Instead, I concocted an awkward but repeatable maneuver of slowing down to a near-walk, clipping into the closest pedal first and then swinging my other leg over…a near glacial procedure but I reasoned it was preferable to ending in a heap again or coming to a complete stop.

We continued tearing around our makeshift course for another 30 minutes, regrouping every once in a while to repeat the following exchange:

Cult Leader Mike: “What do you think, has everyone had enough?”

Everyone: “ARGGGH! You said that last time!”

After 3 or 4 of these exchanges, Cathy (Mike’s wife) responded to the suggestion of “2 more laps” with “I’m heading home.” Apparently, nobody wanted Cathy to have to ride home alone, because everyone else offered to go with her. She claimed she’d be fine on her own, but everyone insisted.

Later that evening as we adhered to the time honored tradition of following CX activities with beer and good food, I knew that the hook had been set. I even reasoned that if I could ever figure out how to get back onto the bike in a reasonable fashion, I had the potential to not be completely awful at this crazy sport…maybe. Either way, I was already looking forward to next Wednesday night’s practice session.

When I arrived at home, my wife asked me how it had gone. I told her “It was SO fun! I’m telling you honey, you HAVE to try it…you’ll LOVE it!”