This was the year that Mike and I decided we were jumping onto the Fat Bike wagon – it simply looked like too much fun to pass up, and Chris hooked us up with a couple of Charge Cooker Maxis. Little did I know then that I would quickly end up with more miles on the fat bike than the brand new Cannondale Evo I purchased in August.

Of course, when we saw that there was going to be a fat bike race in January, literally 30 mins from our house in Maine, we signed up to be one of the 50 people crazy enough to race bikes in the middle of winter. So yesterday, we drove over to Moose Brook State Park in Gorham, NH to pre-ride the course and see what we were in for. It was “warm-ish” (by comparison), with temps in the 20s for the first time in a week! Not knowing where we were going, we headed out from the parking lot and quickly discovered that we were riding the course backwards. No worries though – it was SO SWEET! Tons of flowing single track that had been packed down to provide awesome riding conditions. There was definitely some ice to beware of (we don’t run studs – too expensive!), but nothing that was over-whelming. Ups, downs, bermed turns, bridges, rocks – this had everything to make a race course truly fun to ride.

After a backwards loop of the course (and one wrong turn), we turned to give the course a go in the right direction. I didn’t complete a full loop, trying to save my legs somewhat for race day.

This morning we awoke to temps that were falling FAST. Just before we left, the thermometer here read 2.5 F, and the wind was howling (friends who live nearby had a weather station reading -67 F wind chill

). Arriving in Gorham, the temp hadn’t risen, and the wind was still howling. Dressing to race in these temps was going to be a challenge! Here’s what I wore:

It was so fun to get to talk to so many people who share a similar passion. Everyone was excited about the race, and looking forward to what was to come – whether they were racing 2 laps (8 miles) or 4 (16 miles). I had opted for the full boat – 16 miles! And lining up to start, I saw that apparently I was the only woman to brave the cold temps (remember though, that there is a VERY FINE line between bravery and stupidity!). Since the race was a mass start, I positioned myself near the back of a field of men, and with a quick “5-4-3-2-1” we were off.

I knew that the start was all uphill on a snowmobile trail, and quickly passed a number of other racers. Once we were in the woods, I held my own until the bottom of the first downhill, where a few politely asked to pass, and I let them by. Shortly thereafter, I came by one of those racers sprawled sideways in the trail trying not to plunge into the river! I was glad I had pre-ridden this section a couple of times the day before – it was icy, but I knew the tricky spots, got by him, and continued to the next climb.

This was where I started to smile, and think of my teammates. You see, for many years I have been adamant that I am not a climber. All those guys who went by me in the single track? I was now passing them with ease as we made our way to the highest point of the course

. This continued for the first lap – I would pass on the climbs, they would pass in the single track, and we would meet up again. We all laughed about it.

I rode the first lap a bit cautiously, but managed to ride a number of bridges (I hate bridges), clean sections I hadn’t on the pre-ride, and to cleanly ride the icy chute of death just before the lap ended. Heading into the second lap, I came up reasonably quickly on my good friend Melissa (she’s 17, and has kicked my a$$ from here to Kingdom Come this season). Knowing where she had passed on the first lap, I was concerned and asked if she was ok. She said yes, and we  continued on. As we were down by the river, she stopped in front of me. As I passed I asked again if she was ok, and again she said yes. But, not three pedal strokes later she called out that her rear wheel wouldn’t turn. I wasn’t going to just leave her on the side of the trail, so I stopped to see if I could help. Centering the wheel in the drop outs didn’t help – it was rubbing against the chain stay and wouldn’t budge. Before either of us could become too discouraged, another racer happened by who thankfully recognized that Melissa’s swinger drop outs had loosened up. Of course, neither he nor Melissa had a tool, but I did. He quickly fixed the issue, and before I could even get my multi-tool back in my seat bag, Melissa had dashed off, chasing her brother (she would go on to catch and pass him despite Donnie putting forth a valiant battle to hold her off). (p.s. – Aiding another racer is typically NOT ALLOWED in USAC MTB races, but this was an unsanctioned event!) 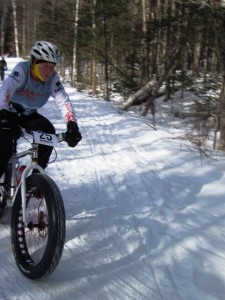 I headed back into the big climb, found a rhythm, and caught myself thinking how much I was enjoying the climbing. I guess I finally have to admit that I am a climber after all! Later in the second lap, I heard Mike coming up from behind – he and another racer were leading the field, and lapping me already. Sigh. I was really glad to see him doing so well, though!

I finished up the second lap, and headed off for number 3. One of the great things about this race was the enthusiasm of the volunteers and spectators. Remember the temperature? There were course marshalls out all day, cheering, encouraging, ringing cowbells. In some places, the noise was deafening. If I was cold, they certainly had to be colder, standing in one spot, in the snow. It was also in this lap that I started to have an issue with my eye freezing – literally, it was cold enough for my eyes to tear, and then freeze! I had to hold my gloved hand over my eye to try and let it thaw

. Thankfully that was the only issue I had with the cold!

I was lapped by a number of other racers as I continued on lap 3, all of whom passed with a smile (?) and words of encouragement. Despite the cold, everyone was having a great time. As I came into the finish stretch, I suddenly had Peter V. sprint like crazy to get by. He later admitted that in seeing the jacket, he thought I was Mike

The fourth lap was a doozy! Ifelt every part of the climbs, but I was still having a great time, and still smiling. You do know, however, that you are the last person on the course when the marshalls are walking down the hill towards you with the course arrows under their arms

They still cheered wildly and provided lots of encouragement. At this point Mike also appeared on the course – he finished (winning his race), changed and RAN back UP the course to take photos and provide encouragement. It was awesome to see him there, and I knew I didn’t have far to go.

One final time down the chute (where I chickened out after having crashed there previously!), and I was finished. Sixteen miles, 3:06, and a great sense of accomplishment! After the race, people gathered in the State Park building for hot chili, hot beverages, bread, cookies and other food, as well as a sweet raffle and the podium presentations. As if I weren’t already tired from the effort, lifting the podium trophy took all the muscle I had left!

This was a superb event, and I can’t wait to head back next year (though we might have to go back THIS year for some more of that awesome riding!). Huge kudos to the people who put this together – I really hope that we can hook up with them for some more rides this year!