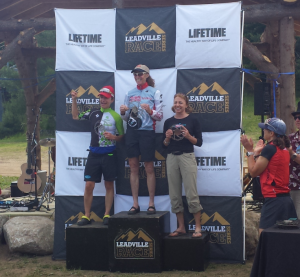 Great weather and 2 challenging races made this year’s Hill Climb and Leadville Qualifier a fine weekend. I rode my Cannondale Super-X on the hill climb and borrowed John’s Cannondale Scaplel for the 100k. Both bikes worked perfectly. As an added bonus having the disc brakes on the Super-X made the 8 mile descent down Whiteface so much easier!!

The Hill Climb started with a 3 mile rollout from the Whiteface Ski area to the bottom of the mountain. The climb, in my opinion, is the most pleasant of all the BUMPS series climbs. It is about a 10% grade the whole way. Never so steep that you are gassed, but steep enough to stand when you need to shake your legs out. Since I had the tougher of the 2 races on Sunday, I used Saturdays race as a joyride. I had to fight just a little bit to capture 3rd female overall. Marti Shea, New England’s climbing legend won easily in an 1:00, 2nd place came in 1:04, I finished in 1:06.

Thanks to John Laupheimer I had a bike to ride at the Leadville qualifier. (my Epic was in the shop with a broken fork) The race in its 4th year has become quite popular. Lots of familiar faces from the Root 66 and EFTA race series. Because my category (female 50-59) is small only the top finisher gets in to Leadville. This always puts pressure on me because I worry about flatting or having a mechanical. The course is mostly dirt and gravel with about 10 miles of pavement. There is very little true mountain biking, but there is a ton of climbing. It is very similar to Leadville. So, this year on the borrowed bike which was not tubeless I ran high pressure in hopes of reducing the possibility of a flat. I had a clean ride, making it to the top of the first climb in 2nd well behind Rebecca Rausch. I quickly lost that on the first downhill. Then managed to trade back and forth with Bryna Blanchard until the first truly steep descent where I was passed by at least 75 people, including Bryna, Jill and Tina Seversin. I spent the rest of the race trying to reel people in on the climbs and not lose too much on the descents. I was not able to catch any of the women, but finished 5th overall and won my age group. I decided not to go to Leadville this year, but will go next year. My finish 5:22 (2 minutes slower than last year in the rain…) this gives me the same starting position for the 2015 race that I’ve had the last 2 years. I think with that staring position and the proper training a sub 9 hour race is possible!