Last summer both Cathy and I purchased Stages single sided crank based power meters for our FSA SLK-Light crank cyclocross bikes, which also serve duty as our cyclocross training, gravel road and all around go to bikes. The cranks were the first viable crank based power meter on the market to break into the sub $1000 range, making them a clear challenger to even the lower level and much heavier hub based power meters from Powertap. We both have other systems on our dedicated road bikes, Cathy a Quarq Elsa and I a CycleOps Powertap G3 wheelset. We have both used power meters for a few years and log our data in Golden Cheetah. As such, we have built a pretty good amount of historical data against which to compare.

The Stages meter is sold as a single sided, non-drive side replacement crank arm for various cranks such as Shimano, FSA, SRAM and Cannondale. Because the Stages power meter has a strain gauge in only the left side crank arm, it means that the unit is only capable of measuring the force applied by one leg, the left leg. The unit then doubles this to give the power output. For most people, this is fairly accurate as most vary only slightly from one leg to the other. 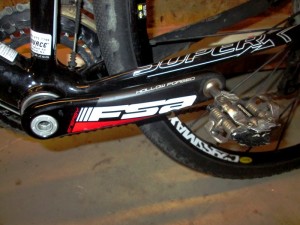 The other note is regarding crank based power sampling as opposed to hub based power sampling. When measuring at the crank, you are measuring the power that the rider is actually putting into the pedals. When measuring at the hub, you are measuring what power is actually making it to the wheel. This means it takes into account drivetrain based power loss. Typically, in a well tuned bicycle, the power loss and resultant discrepancy only translated to a few percentage points less that the power actually being put out by the rider, as would be measured by a double sided crank based unit or the Stages unit with a rider whose right/left leg power matches. This is not a complaint against one or any of the different power metering systems, simply a data point. The result is that if you use different types of meters your data may not be wholly consistent from one meter  to the next and could be off by a few percentage points one side or the other. If you only use one type of meter though, none of that matters as you would get consistent polling which will give you good data. As we all know, it is futile to compare power data between individuals as many of the numbers are arbitrary. Even power/weight ratio has little use for application to anything but your own personal training records.

Out of the box, the Stages meter is just an OEM crank arm with the Stages meter grafted into it. One note is that all of the crank arms are machined to accept the meter assembly. This means that Stages only uses aluminum crank arms and does not use carbon fiber arms.  For Cathy and I, we have FSA SLK-Light BB30 on our Cannondale SuperX disc bikes. The compatible Stages offering for the FSA cranks is the FSA Energy arm, an alloy model. It weighs a bit more than the SLK Light and is a different accent color than ours, but fits and works perfectly with our cranks. Installation was identical to the OEM crank arm. The Stages power meter also takes a common CR2032 battery which is easily accessible with no disassembly. Setup is easy and quick, pairing with a Garmin 500 head unit in our case, via Ant+ data transmission. Simply search for the device once activating the meter by spinning the pedals a few revolutions. When the unit is paired, you can easily calibrate the meter on your head unit with the crank arm in a vertical position and no torque on the pedals. A further nice feature is that the meter is Bluetooth compatible and can communicate with a free Stages smartphone app. This allows firmware update as well as calibration or diagnostics on the unit from the app.

On the road, the Stages works flawlessly and as expected. The data transfers and displays quickly and accurately to the head unit. Though I expected to see some discrepancy between data from the Stages versus the data from the Powertap, I was surprised to find little discernible difference. Realistically, I’ve noted no difference. For instance, I didn’t all of the sudden start setting historical power output records with the Stages meter. In fact, the data of the single sided crank based Stages meter looks nearly identical to the data of my hub based Powertap, again when compared historically. No big increase in power as some would have you believe could be the discrepancy between single sided crank based. 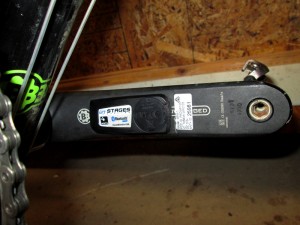 Realistically, I suspect that what is happening is that I have a slight left/right power offset, given that I am right handed and right side dominant. That slight offset to the right is compensating for the for the assumed increase in measured power at the cranks as opposed to the hub, which again accounts for drivetrain degradation. Regardless, the data from the Stages meter has not skewed my historical records adversely in any way. Additionally, since I’m using the meter on a bike with different purposes than that of my other meter, it is even less of an issue anyhow.

The only issues we have seen in a full year of usage are battery life in some intermittent cases and the battery door. This door is a plastic unit with small tabs on it which are quite fragile. I’ve ham fisted and broken a number of them. The folks at Stages have been awesome in  sending new ones though free of charge and now state that they have redesigned the doors using different material that is less fragile. So far, so good with the latest batch and with the latest batteries.

If you are looking for an easy and affordable means of measuring your power output on the bike, I’m sold on the Stages for the time being. Sure, there are meters out there with some neat new features like the ability to measure leg offset, but they cost significantly more money. The hub based meters are, I believe, on their way out. The pedal based meters are just starting to come to market and are seeing some issues. Ultimately, that will be a very viable solution, I’m sure, but for right now, the Stages is a great choice in my opinion and both Cathy and I have been very happy with ours.