I spent my Memorial Day weekend up in the Green Mountains of Southern VT racing the Killington Stage Race. This was my 2nd year doing this race, and I have to say it is a great weekend of riding bikes! I originally registered for the 4/5 Open Field, but due to popular demand, a separate 4/5 Masters field was formed. For KSR, and I believe GMSR as well, the Masters line is 33 instead of 35. Early last week I got an e-mail asking if I would like to switch from the Open to the Masters since I’m on the cusp of turning 33, so I made the switch. However, I knew I was still in for a tough weekend because the Masters are every bit as fast as the Open field, if not, faster.

Stage 1: Lookout Circuit Race
The opening stage of the race is an 18 mile loop that the 4/5 fields complete twice. The stage starts at the Skyeship Gondola, and is neutral for the first Km. In the neutral zone there are a couple of bumps that it never fails, the field gets going too fast down the 2nd bump and the smell of brakes fills the air as everyone slows quick to prevent from running into the rider in front of them. Once past this mark, and the officials hand goes down, the first 5 miles are pretty uneventful. It is a nice false flat down to Long Trail Brewery with avg. speeds well into the mid 20s, and then a turn onto Rte. 100A that slowly climbs over a 6-7 mile span up to the Calvin Coolidge Historical Site for the first KOM of the day. Things were going well on this climb as the pace was high, but manageable. Then, I heard a couple crunches up ahead, and thought it might be a good time to stop pedaling, and be prepared to slow/stop. Sure enough, on the right hand side, there was a 6 or 7 rider pile up. Not

really sure what happened, but assuming wheels overlapped. I thought this would be trouble as the front of the field was getting away, but I was able to get around the crash and gap back up to the front of the field. Once through the KOM at the top, there’s a quick and very steep descent down to rte. 100, and then you head North back towards Killington for the 1st sprint of the day. The group neutralized here, and those who were still off the back from the crash were able to latch back on. 100 North slowly climbs for a couple of miles and then heads downhill quickly into the Intermediate Sprint. Not wanting to contest the sprint, I sat up in the back with about 2/3s of the field while the guys who wanted to go for it did. We then headed back out for Loop 2, and eventually back onto the climb to the Coolidge Site. If there was ever a KOM I could win, this would be it since it is not a very steep climb, and a bigger rider with a lot of power could potentially get away. So as we closed in on 3K to go, I noticed the whole right side of the road had a huge lane. I decided to sneak up the side and get near the pointy end of the field. When we got to the 2K to go mark, I thought this would be a good time to go for it (I’m still not the smartest bike racer!) and I attacked up the right side of the road. This was short lived as it spurred a reaction from the field, and as I hit the steepest part of the climb, the tiny guys at the front caught me and passed me. While my attack was unsuccessful, I was successful at breaking the main field apart into 3 smaller groups. So I had that going for me, which was nice! Needless to say, I did not get the KOM, and my effort burned a few matches, so I did end up losing a little bit of time in the run to the finish. But overall, I was very happy with my day, and where my fitness was compared to the previous year!

Stage 2: Road Race
This stage is a 61 mile loop that has two VERY big climbs on it. One comes at about Mile 30, and the other goes up East Mountain Road to the K1 Base Area for a summit finish. This is not the ideal stage for me as it has almost 5K feet of climbing. I like to climb, but I can not keep pace with smaller guys who are putting out 2/3s the power I am. For me, the goal of the day was to hold on as long as I could, and improve on last year. When the day starts, you head North on Rte. 4 towards the main Killington Access Road. As you get closer to the Town of Killington, there is a pretty steep 2.2 mile climb that goes into a long descent down Rte. 100. Knowing I would struggle to keep pace, I had it in my he

ad that I need to be in that front 1/3 of the field heading onto this climb. So as we rolled out for theneutral start, I inched my way up the field to the front 1/3. When the officials arm went down, I ended up in 3rd wheel with the Race Leader in front of me. The front guy pulled off, and the leader took over. I was happy to let him pull all day if he wanted to and eventually one of his teammates jumped in front. Not long after, they pulled off pretty quickly and I was now front wheel. Before I knew it, we were at the climb, and I was leading the field onto it… NOT GOOD! Having been in the front, and exposed to the wind, I hung for the first mile, and then faded back with a group of 9 or 10 riders, which 3 or 4 fell off before we got to the top. We rode together for the next 25 miles until we got to the first big climb, and I lost all of this group except for 1 guy. We rode together the rest of the way until we got to East Mountain Road, and as he fell off my wheel, he yelled, “see ya at the finish!” As I slogged my way up the 12% grades, I gradually picked off some stragglers from our field to move up a few places on the day. I turned onto the Killington Access Road, and grinded through that last km to the finish line. I had a solid day, and knocked almost 20′ off my time from 2014! And to top it off, they had free cookies at the finish! There were even people still skiing as Killington had 1 trail open over the weekend.

The first two days conditions were pretty difficult with winds from 20-30mph, and temps in the low 30s on Saturday, and in the mid 80s on Sunday!

Stage 3: Long Trail Individual Time Trial
I was really looking forward to this stage, but when I woke up Monday morning, my legs felt MEH from the two hard days before. But I quickly moved on, and told myself to get ready to go! I got all my gear together, and started driving North to Killington. While my drive is not pertinent to the actual race report, I couldn’t leave out the fact that a giant female moose decided to cross the road in front of me while heading over Terrible Mtn. Pass into Ludlow. Thankfully, she was about 200 yards ahead, so I had plenty of time to slow down. She trotted across the road, gave a quick glance about halfway across, and then headed right back down into the woods on the other side of the road. Unfortunately, I did not have time to snap a pic, especially since this was the first moose I’ve ever seen! Now back to the TT… I go to Long Trail and started my warm up. My legs were now feeling better after eating breakfast, and getting them moving again. I felt confident going into this stage because I had a strong effort at Charlie Baker TT (shout out to John who does a great job organizing/running this weekly race) given the fact I did an hour of hill repeats that morning. When I got to the start I checked in, and kept running my race plan through my head. I have this ability to believe I can fire out of the shoot at a very high wattage, and maintain this for 10 miles, but have yet to succeed at this… hmmmmm! So my plan for Monday was to aim for a wattage just below my threshold for the first half, and once I hit the halfway mark, empty the tank for the second half. The beeps began for the 5 second count down, and I was off when the countdown hit zero. I got into the right gear, and settled into my aero bars and the power number I was aiming for. The miles started to tick off, and I was nearing the 4 mile mark. I now saw the rider who started 1′ ahead of me (the rider before me was a no show), and had to do everything in my power to keep from chasing him down. Eventually I caught him around the 5 mile mark, and saw the ride 1’30” and 2′ ahead. This to me was close enough to the halfway point, and I started to ramp up the pace wanting to catch those 2 riders as quickly as possible. The stage profile for the TT is 10.5 miles of VT flat that rises over 400 feet, with a couple of little bumps in the middle, and then a larger bump with 1K to go then a fast flat run into the finish. I caught the next rider in the middle of the 2 bumps, and got by him pretty quickly. After the 2 bumps, I then caught the next rider. I was now on a flat straightaway for the next 3 miles, and was Hammering it! This was easily the best I have felt in any Time Trial, and the numbers I was seeing on my computer were backing this up. I got to the 1K to go mark, jumped out of the saddle and powered up the hill. I then turned onto River Street that heads into the Town of Killington, and got back down in the bars. I was running the numbers in my head, and could tell I was blowing my previous years time out of the water. I saw the 500m to go banner, and pushed for every ounce of power I had left. I came across the finish line, and 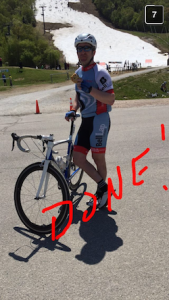 stopped the clock at 28’54” averaging 22mph, more than 90″ faster than the year before. I was ecstatic to say the least, and thought I might have a chance at a top 10 on the stage. I had looked at times from the previous year, and thought this would be right up there. However, there were some REALLY fast Time Trialists, but I still managed a Top 20! I then got a nice little e-mail from Training Peaks that evening saying I set a new 20′ Power Record, and they recommended I increase my Threshold Power number. This was the cherry on top of what was a great weekend!

I definitely recommend this race for those who haven’t done it. Its really well run with lots of support from local police/sheriff’s departments, as well as course marshals.