It has been years since I’ve done a race report but I thought it would be fun and appropriate to do one for my first 50k ski race.

With temps in the teens and a howling wind, twas a bitingly cold and windy day to race my first ever 50k up at Black Mountain in Rumford, Maine last Saturday. The John Roderick Marathon is low-key affair and therefore perfect for first-timers, or so was my reasoning. But let me back up a bit. 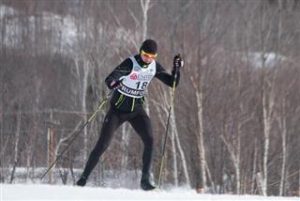 Some of you may wonder how I got to Bikeway Source and why I am even racing skis and not bikes. For the 2015 season I signed for the Lupus Racing Team after an injury-marred 2014. However, the historic snowfall coupled with seeing first-hand how caring too much about bike racing literally destroy a friend’s life and family, I had no appetite to race bikes. Indeed, ever since then I’ve viewed extracurricular exercise as sort of this Hegelian dialectic: a life balancer that can become an unbalanced obsession when reality is lost. Having never skied in my life, skiing was something completely new I could get my energy out doing without feeling (too) guilty about doing it. One of those first couple of skis I did at Great Brook was how I met Gary and got hooked up with Chris and Bikeway Source.

Much as when I first started riding all I wanted to do was race marathon MTBs, the 50k distance was instantly the first thing that called to me in skiing. That first winter, two years ago, I did a painfully slow 40k at Sugarloaf and a 30k at Craftsbury but never a full 50k. My plan last year was to race all of the skate 50ks in the Northeast as part of the marathon series. However, the terrible winter caused everything to be cancelled except a shortened Black Mountain race on one of my best friend’s 30th birthdays; hence, no racing.

Before the race my goal was to break 2:30 for the 50k. The course was 9 laps of 5.3km. Looking at the start list there were two guys I knew who would be fast: a 5th year senior on the Dartmouth ski team who hails from Alaska and local Westford guy who is a skier at Bowdoin. Right from the gun these two take off. I started near the back somewhat on purpose to help keep my promise of pacing myself correctly so I wouldn’t go out guns a-blazing then bonk three-quarters of the way through the race. Halfway through the first lap Dartmouth is way up the track and Bowdoin has become detached. By the end of the first lap I had passed through traffic and slotted into 2nd, trying to keep the gas on to grow the gap between me and 3rd. Unfortunately, in my hypoxic induced haze I skied off the course on the third lap, adding 0.5km and 1:36 to my time. After backtracking I had to pass into 2nd yet again — a little more stress for a little longer than I hoped!

After a couple of more laps the gap was big enough between myself and first and third that the strategy shifted to just holding onto second. I was aided in this by lovely wife, Rachel, who stood near the feed zone table to hand me shots of maple syrup each lap! By the second to last lap Dartmouth had lapped everybody and was a minute or so behind me so I turned up the gas again to not get lapped. I was able to hold him off but I paid for it somewhat on the last lap. Still, I was able to put in a decent lap time to finish in 2:27. The winner was 2:10 and 3rd was 2:35. 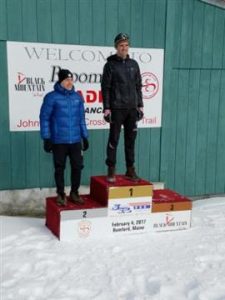 Overall it was a great experience. The effort reminds me a lot of a 100k mountainous MTB race where that last quarter is always a slog. 2:10 does not seem unrealistically fast — for me I need to shore up my turns and transitions where I am hemorrhaging 3-4 seconds every turn; if there are 20+ turns per lap… I was also sneezing all Friday before the race and felt okay but not great during the race. Sure enough, I now have a full-blown cold so there is that. Now time to recover and then do the remaining skate 50ks: Lake Placid, Rangeley, and Sugarloaf, as well as Ski to the Clouds (Mt. Washington on skis!).

PS: Had my Bikeway Source skinsuit top on but it was so cold I had to wear a jacket racing and on the podium. Was prepared to take the jacket off for the overall podium but they only did age-group podiums for some reason.